Writer Beware: How NOT to behave toward readers and fellow writers.

The screencaps in question came from a writer's Facebook profile from a couple of days ago. The conversation started with the writer (who from what I could tell from their comments has been publishing for only about a year) bemoaning cliques, bullies, poor sales, etc. and that there was JUST SO MUCH dreck out there it was difficult for a writer to get ahead, bemoaning that another writer had just announced they were going to quit writing, etc.

A commenter (Se - full name redacted) made the comment regarding the genre of dark erotica (DE) that people who write it, and, well, you'll see for yourself. And the author, whose profile it was, AGREED WITH THEM. Keep in mind the author who owns the profile is an author of MM erotica. 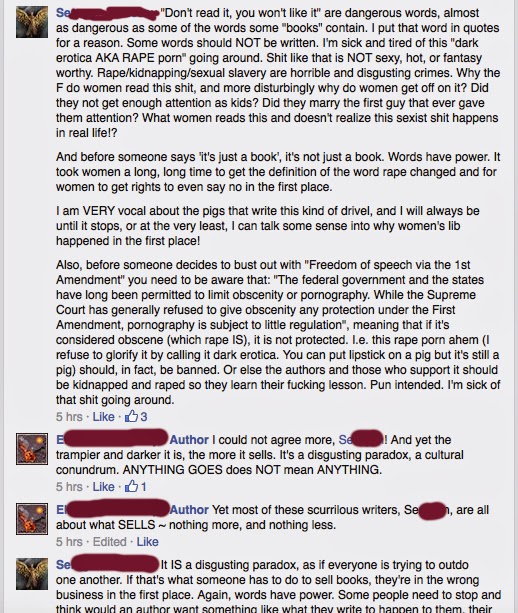 Um, WOW. "Or else the authors and those who support it should be kidnapped and raped so they learn their fucking lesson."

Keep in mind, the commenter, Se, according to her profile, is an ACTRESS IN B-GRADE HORROR MOVIES. Um, yeah. Glass houses, much?

But even more disturbing is that not only does the author, E, let the comment stand, she REPLIES TO IT: "I could not agree more, Se! And yet the trampier and darker it is, the more it sells. It's a disgusting paradox, a cultural conundrum. ANYTHING GOES does NOT mean ANYTHING."

Ya know, if someone put something on my wall stating that authors and readers of certain genres should be "kidnapped and raped so they learn their fucking lesson," I'd personally be DELETING the comment and blocking the commenter. NOT agreeing with them!

(Gee, I wonder why this writer has poor sales?)

Here in the US, we fucking SHUT DOWN SCHOOLS for vaguer social media threats than that!

But, benefit of the doubt and all that. Maybe she didn't read the whole comment? Hmm. 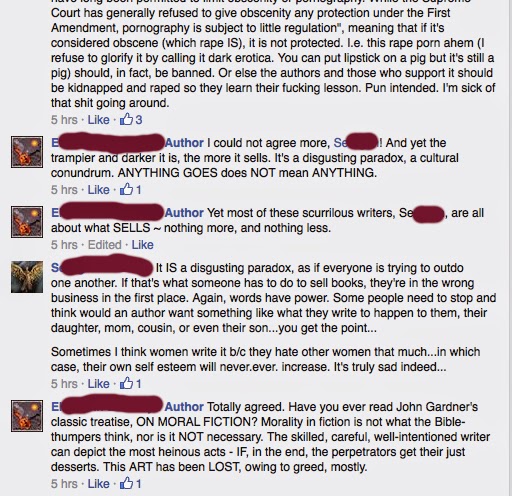 Se comments again, talking (ironically) about words having power. Writing about how those authors must hate other women. And the author, E, agrees...AGAIN.

Well, gee, what happens when someone calls her on it? (Keep in mind at this point, the original comment by Se was STILL up, along with the author's responses (not once, but TWICE stating she agreed with the commenter, Se). 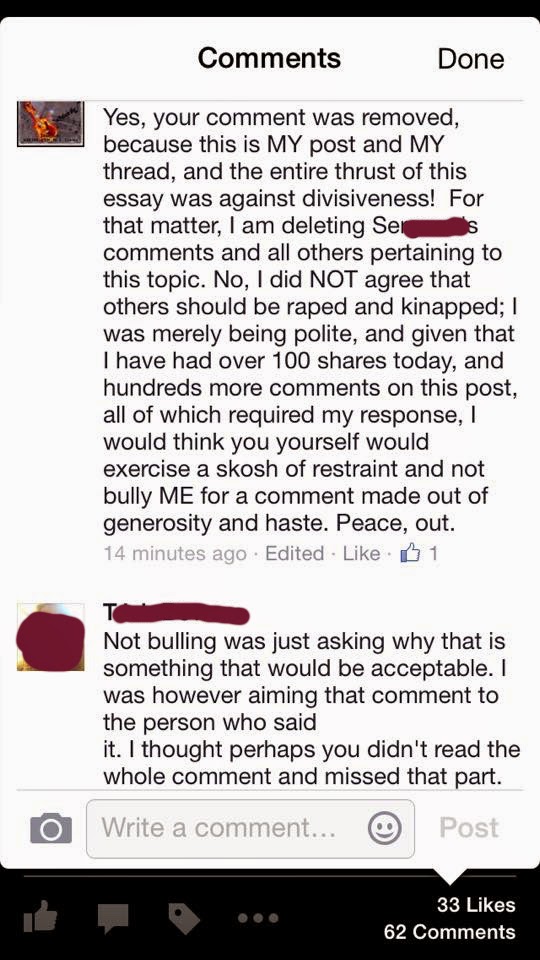 Um, well, TWICE she agreed with Se's comments. Guess she didn't think people would, I dunno, call her OUT ON THE OUTRAGEOUS AND HEINOUS COMMENTS??? Because, see, she commented NOT once, but TWICE about Se's comments before Se commented again. So, I'm thinking she had PLENTY of time to think about her response to Se. It sounded pretty straightforward to me. Also, I'm not sure how the author E defines divisiveness, but apparently it differs greatly from mine, because agreeing that writers and readers should be kidnapped and raped is pretty fucking divisive. 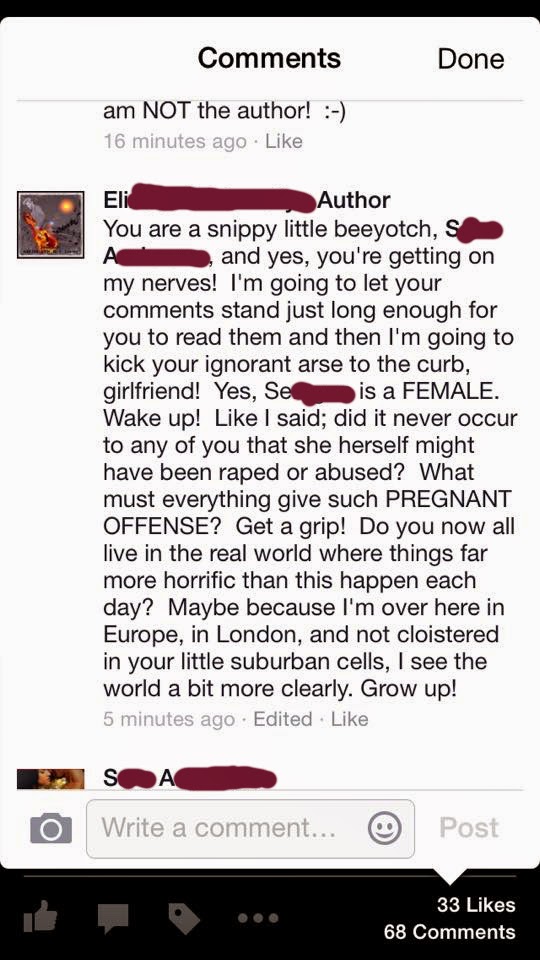 The comment in question had already been deleted, so I couldn't get a cap of that. But SA called the author out on the bullshit, and that was the author's response. Wow. I guess it's okay if you're a victim of a sexual crime to wish kidnapping and rape on authors and readers of genres you don't agree with. Nice logic fail. But, since she's in London, obviously she knows better than the rest of us poor hicks elsewhere in the world. Narcissistically superior attitude...check! But we're not allowed to have "pregnant offense" about a comment suggesting kidnapping and rape of authors and readers of DE is all right. Okay, gotcha. Double-standard. Check! I would also hazard a guess that Se or the author likely have not been victims of such violence, because I cannot imagine ANYONE who has been in that position and is a survivor (myself included) would EVER wish that kind of fate on someone else. So, I call BULLSHIT. I've wished many evil fates on fuckers in the past, but NEVER THAT. So...again, BULLSHIT. 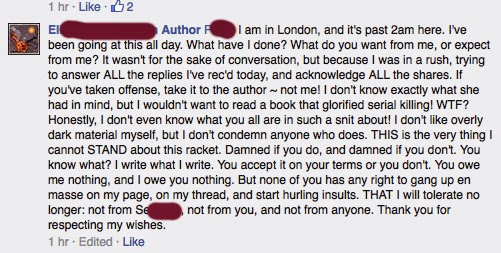 Oh, so she was just being POLITE by agreeing that rape and kidnapping authors and readers of DE is okay. Ahhh. That makes it all better. And pity poor her, she's being bullied because she dared agree with someone suggesting heinous crimes are an okay response to writing something someone else doesn't like. She doesn't even know why everyone's in a "snit?" (Keep in mind, the original heinous comments from Se, come from someone who ACTS IN HORROR MOVIES. So, it's okay to glorify killings as entertainment in a movie, but if you write DE, that's not okay. Uh huh. Got it.)

But she also LIES in this comment, because she DID condemn people who did. (She'd already deleted the comments by this point. Yay, screencaps!) So, it's okay for HER to insult (and incite violence against) people, but it's NOT okay for people to call her out on it. Gotcha.

You know, I get that there are flavors of fiction that don't appeal to some. I get it, I really do, because there are flavors of fiction that I don't like. HOWEVER, there's a huge difference between saying you don't like something, and suggesting authors and readers of those genres you don't like should get kidnapped and raped to be "taught a lesson" about it. I'm sorry, but that's morally reprehensible rhetoric, IMO, and it smacks of the same kind of bullshit the Taliban and other radical religious nutjobs spout. And these are SUPPOSEDLY "liberal" people saying this shit. It's FICTION. If you don't like it, DON'T READ IT, but don't go saying shit that makes you look like a genetically inbred asshole, either.

And yes, regardless of what Se thinks, IT IS THAT SIMPLE.

You want to talk about books that incite violence against others? Let's start with the Bible and other religious tomes, shall we? Hmm? Because I've read the Bible. There's murder and rape and all sorts of lovely little things like that against others in there. So should we ban the Bible or other religious tomes for those reasons? Because, hello, according to Se and the author, that's exactly what should happen, those books don't deserve a place.

Hot news flash: YOU DON'T GET TO PICK WHAT OTHER PEOPLE CAN READ, ASSHOLE.

I wonder if there is a category in Weight Watchers for activity points earned by backpedalling? Because, damn, instead of just deleting the WHOLE goddamned thread, the author dug herself a deeper hole. I guess she thought the Internet isn't forever. Screencaps, biatch. And I'm doing her and the commenter a favor by redacting her name. (Although I do have the unredacted screen caps up in my Tymber's Trybe group because the night it happened I ranted in there about it.)

So to the author in question: Hmm, let me help you out here. Why do your sales suck? I looked you up, and you have a history of going after people who give you one-star reviews. This is not the first time you've committed acts of asshattery. Are there bullies and cliques on GR and elsewhere? Yes, It's called LIFE. However, I can see by your actions that you aren't exactly what I'd call a little ray of sunshine, there, girlie. Your very behavior in this thread, attacking people who RIGHTFULLY called you out on your bullshit (and I also did you a favor by not getting screencaps of all your asshattery, because most of the people who called you out did so with FAR more class than your responses) shows you are NOT mature enough to deal with the public. Do yourself a favor: DITCH YOUR SOCIAL MEDIA. Focus on WRITING YOUR BOOKS and quit pissing and moaning about your sales. Because, seriously, based on this exchange and others I've found out about you, it's not other books tanking your sales, chica.

You're a whiny, narcissistic, entitlement-minded BRAT. Readers notice that shit. You insulted readers. You probably lost a shit-load of potential readers from the people who saw the original dust-up on your page. You'd already lost several dozen friends by the time I blocked your sorry ass. You will never get any promo from me, and I already booted and blocked you and several of your pimping team from one of my groups over this.

Oh, and next time an asshat comments on your wall that people who write and read dark erotica (or ANY kind of book) should be raped and kidnapped, DO NOT AGREE WITH THEM. (Twice.) DELETE their fucking comments. And for fuck's sake, when you fuck up, APOLOGIZE. Do NOT dig yourself a deeper hole and accuse the people who call you out on it of being bullies. (Because, sorry, you agreeing that DE readers and writers should be kidnapped and raped IS BULLYING.) I don't know how you Londoners do shit, but here in the US, we don't look lightly upon people making those kinds of comments.

There was a time when GLBTQ romance and erotica (since you are a writer of MM erotica) was basically demonized. Yet you think nothing of demonizing another genre of books?

It is as simple a matter of IF YOU DON'T LIKE IT, DON'T READ IT.

Sorry you feel your sucky sales are the fault of other people, but I strongly suspect based on your reactions in this case that you will remain clueless.

Those of us who are writers because it's WHO WE ARE, not just what we do, we will NEVER stop writing. We just won't. Maybe you're not cut out to be a writer. We'll write even if we have to have a day job in addition to writing to pay our bills. If your sole concerns about your career are your sales, you are definitely in this for the wrong reason. If you think other genres that are selling are taking away from your sales, it just goes to show you do NOT understand the business of publishing. It is NOT a zero-sum game. Publishing is NOT a finite pie that will be eaten up and gone if you don't get your slice.

And frankly, you don't seem to have a grasp on the business of publishing. If YOU aren't in it just for the sales, then WHY ARE YOU FUCKING WHINING about what books DO sell? Seems like that's a pretty contradictory mindset, bucky.

It's a long, long marathon. And by insulting readers and their intelligence, you aren't going to garner many friends. You're bemoaning you aren't "successful" after a year of publishing? Bitch, I've been doing this for SIX FUCKING YEARS as a fiction writer and I'm still trying to find my way. There are writers who've been published longer than I am. It's called PUBLISHING. And it's a BUSINESS. And you do NOT win friends and influence people by being a cunt to readers and insulting their choices in reading material. (And yes, the word cunt appropriately describes you in this instance.)