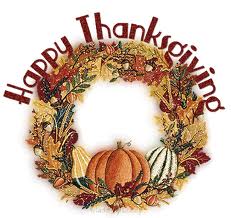 Happy Thanksgiving to all my friends in the US (and military and their families stationed ovreseas)! I hope everyone has a great day!
No comments:

One of the questions I hear a lot (and I'm sure other writers hear) is, "Where do you get your ideas?"

That's a tough question to answer, and yet it's also easy.

I went to a mystery writer's convention once and listened to Carl Hiaasen speak. His answer was since he worked for the Miami Herald, and he lives in Florida, he basically opened up the newspaper for his ideas.

That's not as simplistic an answer as it might seem.

As a writer, the first thing you need to learn is how to ask, "What if...?" Because that is, literally, the basis of all your work. That's how you find your way. It won't give you the fine details, but it starts you on that journey.

Getting ideas is never an issue for me. I have way too many to ever write as it is, with more streaming into my brain on a daily basis. I keep a notepad or my phone (Droid X2) or iPad near me at all times so I can jot notes to myself. Sometimes those ideas become independent stories, and sometimes they are incorporated as plot points in existing works.

I love watching shows on the History Channel and Discovery Channel, because they air neat shows that, while the premise of the theories posed might not be something I'm interested in, there might be a nugget of an idea there I can run with simply by asking, "What if...?"

Keep an open mind, open eyes, and open ears. As a writer, those will be some of your most valuable tools.
No comments:

Here's a quick post with some links to the most common errors in grammar. Enjoy!

Email ThisBlogThis!Share to TwitterShare to FacebookShare to Pinterest
Labels: grammar

We went to dinner Sunday night at a place we frequent once a month with friends. A nice Italian restaurant, not cheap, but not uber-expensive either.

They'd redone their menus, and when I opened it, my eye immediately twitched at one heading...

So when you don't know if you're supposed to use dogs or dog's, for example, SAY the sentence out loud, and expand the word. Use the one that's correct:

I see a few topics come up from time to time on a regular basis from new authors, so I thought I'd blog about it. Topic: reviews.

When you're a new author, you bite your nails and pray the first reviews (professional or reader) come through positive. It's easy for a neutral or negative review to send you plummeting to the depths of despair.

Here's a secret: Reviews don't matter. At all.

If you truly want to be a professional author, develop a thick skin now, because the sad truth is that you will find plenty of people who seem to derive sadistic joy in leaving low ratings, usually without an explanation. Some will leave negative reviews explaining why, and most of those will be little more than barely-legible rants. Even sadder? Some of those reviews will come from review sites.

And there are people who apparently have grudges against certain genres or publishers or whatever, and who will, on sites like Goodreads, leave 1- or 2-star reviews without any explanation. I'm talking if you look at their profile, they will rank a WIDE swath of books with 1's and 2's with no explanation whatsoever. (As opposed to people who will leave a reasoned review.) Apparently it's a childish sport they enjoy, and they think they're getting away with it, when the truth is, most professional authors ignore them, if they even see them. (So those of you childish tools who get your jollies doing just that, I've got news for you, you're just spinning your wheels. Hate to disappoint you, but your efforts aren't working.)

So here's the thing you need to do: IGNORE reviews. If you get a good review, fine, quote a snippet from it. Treat negative reviews as if they don't exist. Do not argue with them, don't fight them, don't respond to them. PERIOD. Believe me, I've seen plenty of author meltdowns that went badly, and the readers WILL remember a public author meltdown and blacklist you, but they most likely won't even see the negative review that was left in the first place if you ignore it. If they see it, chances are, they won't even remember it. OR, if it's outrageous enough, they'll buy your book just to see what the fuss is about.

That's a win, my friends.

So laugh off bad reviews. Seriously. Chalk it up to you have officially joined the ranks of professional authors and act professionally: ignore the bad. Do not live and die by reviews. Don't let them ruin your day. Do what I did, and eagerly anticipate your first bad review, because it means you've made it.
13 comments:

Email ThisBlogThis!Share to TwitterShare to FacebookShare to Pinterest
Labels: reviews

I've seen this come up periodically, and a run-in with a truly obnoxious sigline the other day prompted this blog post.

What is a sigline? Sigline is short for "signature line," the close of your email. For example,

That is effective. And depending on if you're posting on email lists or not (and if you're an author, you should be), you might be limited by list rules as to how many lines you can have.

Let's start with what NOT to put in your sigline:


Now, those items cover 90% of poor sigline etiquette. So let's cover what you should do in your sigline:
I know some of you are whining, "But I have my banner in my sigline!" Or, "But I excerpted my great review in my sigline!" Tough noogies. Here's what happens when you post to an email list and people get it in digest form: you end up clogging their email inbox with a HUGE ASS bunch of crap. Especially if you post to the list frequently. So if you post, for example, five times in one day to an email list, and your sigline is coming in at twenty lines, that's one HUNDREDS lines people have to scroll through over...and over...and OVER again.
Get the picture?
Honestly, most people ignore or grumble about long signlines. They scan through them to get to the next message. If they get their email in individual post format, they stop when they get to the end of the email and hit delete. Most of the time, your long-ass sigline is only being kvetched about by people you've annoyed. So it's not an effective marketing tool if you're misusing it by cramming a lot of crap into it.
So do yourself, and your readers and fellow listmates, a favor: keep it short, sweet, to the point, and no funky text or graphics.
2 comments: