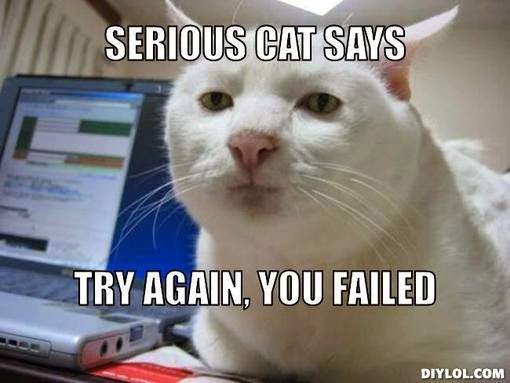 ...HOWEVER, don't take it personally. EVERY newbie writer sucks.

It's the nature of the beast. Do you think Mozart's first composition was one of the finest pieces of music anyone's ever heard?

So how did he get better?

He practiced. He WORKED at it. He became a SLAVE to his calling.

Just because you read books does NOT mean you will be a great--much less a good, or even mediocre--writer. It just doesn't.

Just because you got good grades in English and you're a fledgling grammar Nazi doesn't mean you'll be a good writer.

What's the difference between dialog and action tags? How do you properly format them? What is passive voice and why is it so detrimental to your writing? Why is it a bad idea to write from multiple characters' viewpoints in the same scene without a clear break? How do you use page breaks and paragraph formatting so you don't fark your manuscript's formatting? Huh? HUH?

If you stammered at ANY of those questions, trust me, you need to do some work.

Now, I'm NOT saying you can't and won't get better. But if you wake up one day deciding you can write a better book than you've been reading, GREAT! Go for it.

But don't expect your first attempt to not suck big, hairy donkey balls. Because it WILL.

And guess what? That's OK. I have nearly SEVENTY books under my belt, and I am the FIRST to admit I need an editor. Anyone who thinks they don't need an editor is delusional. (Go take your damn meds.)

Unfortunately, I've seen WAY too many people who let someone glance over their work and then throw it up on Kindle or elsewhere, and they're shocked that they get horrible reviews and make little to no sales.

That's because it's the equivalent of booking Carnegie hall for a concert after you've been taking piano lessons for three weeks.

EXPECT failure. Especially early on. Sign up for the Internet Writing Workshop and submit your book a chapter at a time to the Novels-L (or other) critique groups. Critique other people's works, and READ how other critiquers looked at the same piece you did. See what you missed, see what they missed, and improve your own skills.

We've got this "get rich quick" mentality settling in self-publishing that's really disheartening to see. A lot of people are in this to make money. Yes, I write to make money. BUT, and here's the thing: I WOULD STILL BE WRITING EVEN IF I DIDN'T MAKE A DIME AT IT.

Yes, I would have to be making a living doing something else. But I am a WRITER first. I'm not a disgruntled reader who decided I could do it better/faster/shinier. I write BECAUSE I'M A WRITER. I also know that since I'm lucky enough to have my dream job, I treat this like a business, because it IS.

No, those two ideas are not contradictory. If someone jumps into being an author because they want to do it for a living, and they were never a writer before, guess what? You're going to suck at it. You'll suck hard, you'll suck deeply, and you'll probably soon become disillusioned by the whole thing.

Those of you who always wanted to be a writer, but you never got around to doing it until later, okay, you've got a good emotional foundation under you, but you MUST PUT IN THE WORK. That's not me being all crotchety and "hey you kids, get off my lawn," either. Well, a little, but that's normally me anyway.

But do you honestly think because you can make a kick-ass grilled cheese sandwich that you could go take over one of Mario Batali's restaurants and not get yourself laughed out of the kitchen?

No. (If you think yes, shut up and, again, GO TAKE YOUR FARKING MEDS.)

Those of us who've always known we wanted to be writers, we've worked at this for YEARS. I'm NOT saying don't try, don't submit, all of that. What I'm saying is don't expect your first attempts to not suck. Especially if you don't do the groundwork because you're in some sort of shiny new author frenzy.

Do NOT get sucked in by self-publishing "services" (vanity presses) that will charge you to publish your manuscript. (This is different from you hiring editors, cover artists, etc.)

Buy books on writing and READ them. Find blogs on writing and READ THEM. (Look over in the right-hand column, I have SOME LINKED THERE!!!) Get subscriptions to Writers Digest and others and READ THEM. Get yourself a copy of CMOS (Chicago Manual of Style) and USE IT, because publisher DO use it, and if you don't apply its standards, readers WILL notice and ding you on it. LEARN and RESEARCH the business end of publishing, because writing the book, believe it or not, is the EASY part of this whole equation.

Most of all, ditch the farking diva attitude. Just because your besties at wine club LOVED your book and raved over it doesn't mean you can turn into Francie McCuntnugget when someone points out that you didn't format a SINGLE one of your dialog tags correctly. Or that you mixed up your/you're, there/their/they're, to/too/two, then/than, and other commonly blown words in your manuscript.

If you have a book out, quit spamming the damn Facebook groups about it and TALK TO PEOPLE. Interact with them. Like a cocktail party, don't you get aggravated when an insurance guy comes up to you and tries to hard sell area? Yeah? Well, WHY THE FARK DO YOU THINK IT'S OKAY TO DO THAT ON FACEBOOK?????

I don't know what spammer handbook some authors are reading, but it needs to get BURNED and forgotten.

Go get Kristen Lamb's "Rise of the Machines" book and READ IT COVER TO COVER. Subscribe to her blog. And quit whining that you didn't know better when people start blocking you and booting you from their groups for not paying attention to the promo rules. It's no excuse.

I don't mind helping newbie writers. I was mentored by some pretty great people, and I like mentoring others. I do. This is not a case of me saying, "Well, I had to work hard, so you should have to work hard, too." Guess what?

WE ALL HAVE TO WORK HARD. There ARE NO SHORTCUTS.

But what pisses me off are people who expect me to hold their farking hand for them when they could do five minutes of Google-fu on their own and get the answers they seek. Or, worse, when I GIVE them the info and they don't take the time to use it and continue to whine about whatever it is they were whining about before.

Suck it up, buttercup. This isn't a game for the lazy, the thin-skinned, or the ego-inflated. Any of those will bring you more trouble than you ever dreamed of.

Yes, there are petty, backstabbing asshats in this business. Way more than just a few years ago when I first started, I'm sad to say. But there are also a LOT of great people. If you align yourself with the POSITIVE people who are not only doing well, but who are LIKED by their readers, and who are LIKED by fellow authors, guess what? You'll learn a few things. Good behavior will rub off on you. Just like if you hang out with the people who are constantly bitching that they're getting their accounts suspended for spam, etc., the people who think blitzing social media a thousand times a day, or (REALLY skeezy) BUYING "likes" or Twitter followers or whatever, then guess what? You'll end up earning a skeezy rep, too.

Readers notice that shit. They really do. If you create sock puppet accounts and give yourself great reviews and give your "competition" one-star reviews? Guess what? Readers FIGURE THAT SHIT OUT. They'll blacklist you and you won't even notice it until you see your sales start to tank and flatline.

Yes, it's hard work to do this the right way. But guess what? If you do this the RIGHT way the FIRST time? You will be building yourself a solid career path that, IN TIME, will eventually pay off for you. It's a marathon, NOT a sprint. And anyone who tells you otherwise is probably trying to either get you to buy into some scheme, pay them for their "services," or looking for people to pimp them out by sweet-talking you into something you shouldn't be involved in to begin with.

Be honest. Be genuine. Be yourself. Don't try stupid gimmicks to fool readers. There is no secret. The path to success consists of a few very easy to remember steps:

That's IT. That's the secret to this. Especially the writing good books part.